Spoiler alert: I will discuss some of the few secret instructions found in the A∴A∴. I will try not to get into much detail, but if you do not want to spoil any surprises, maybe you shouldn’t read this article!

The A∴A∴ system has been adapted from the Hermetic Order of the Golden Dawn and their second order, the Roseæ Rubeæ et Aureæ Crucis. One of the most significant changes in the A∴A∴ structure is that every member works alone, guided by an instructor who is someone who has attained at least to the grade immediately above the student. “Whosoever knows any member of that Order as such, can never know another, until he too has attained to mastery.” (Liber Causæ).

Although A∴A∴ members are not expected to perform their personal work together, Its system has specific cases of group rituals: the ceremony of the seven holy kings and the initiation rituals of the first two Grades1.

It’s important to note that the A∴A∴ Grades are attained, not merely granted by a ceremony. A∴A∴ Initiation Rituals are the crown of a particular work, they mark the progress in the journey of the aspirant and provide further insights and keys into his inner work, but they do not grant any kind of special powers. As is said in Liber Causæ:

“In all systems of religion is to be found a system of Initiation, which may be defined as the process by which a man comes to learn that unknown Crown. Though none can communicate either the knowledge or the power to achieve this, which we may call the Great Work, it is yet possible for initiates to guide others.”

Ritual XXVIII is Septem Regnum Sanctorum, the ceremony of the “Seven Holy Kings”. It is not an Initiation Ritual per se, but it’s among the three only group ceremonies found in the Order. Although only a few Probationers 0○=0□ are selected for this ritual, this is far from being an honor, as its instructions explain:

“(Probationers who are idle or luxurious shall be given a task suitable to their natures. If they refuse the task from laziness or from a feeling that they have more important business (as their Neophyte may judge), then may V.V.V.V.V. 8○=3□ himself inform them with much deference that they are now fitted for admission to the Mystery of the Seven Holy Kings”

The aspirant hears he has been chosen and is blessed by officers representing the seven planets. In the end, unless he said he didn’t seek such blessings, he is put into a “dungeon” for seven hours, until he is rescued by an officer, who symbolically puts him in the throne of the Third Order.

A typescript of Ritual XXVIII can be found at Warburg’s Yorke Collection, Film 1, NS94: The Rituals of A∴A∴ 1. 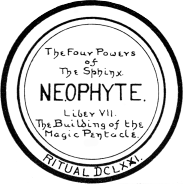 “At the end of the Probation he passes Ritual DCLXXI, which constitutes him a Neophyte.” — Liber XIII

There are two rituals assigned to the number 671 (DCLXXI):

Liber Throa is a temple ceremony, performed by two officers, an Hiereus and a Hegemon. This ceremony was adapted from the initiation Ritual of the Neophyte 0=0 from the old Hermetic Order of the Golden Dawn, the A∴A∴ predecessor order. Its preparations and performance takes seven days, as is stated in Liber Collegii Sancti:

“When the sun shall next enter the sign under which he hath been received, his initiation may be granted unto him. He shall keep himself free from all other engagements for one whole week from that date.”

Although Liber Throa has been devised by Crowley and approved by Jones, the only available evidence of its use we can find is one possible performance to receive Victor Neuburg.

“I had the conveniences for conferring upon Neuburg the degree of neophyte, he having passed brilliantly through his year as a probationer. […] After putting Neuburg through this initiation¹, we repaired to London.

¹ The preparation for this was in some ways trying to the candidate. For instance, he had to sleep naked for seven nights on a litter of gorse.”

In 1908, Crowley adapted Liber Throa into a self-initiation ceremony called Liber Pyramidos, performed by him in his attainment recorded in John St. John (See The Equinox, Vol. I, No. 1).

Nowadays there is much debate about what is the correct ceremony to admit A∴A∴ Neophytes: Throa or Pyramidos. As far as the publicly available records tell, Crowley applied neither to his candidates. Thus each A∴A∴ claimant group selects its own admission format.

Crowley also developed a further adaptation of the H.O.G.D. Neophyte formula: the Meditation “MMM”, Πυραμις (Pyramid), in Liber HHH, to be studied and performed as a task of the Grade. 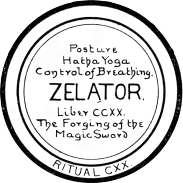 “Finally he passes Ritual CXX, which constitutes him a Zelator.” — Liber XIII

After completing the work of a Neophyte 1○=10□, the aspirant passes Ritual CXX, Liber Cadaveris, “The Ceremony of Passing Through the Tuat” which constitutes him a Zelator 2○=9□.

“When the sun shall next enter the sign 240° to that under which he hath been received, his advancement may be granted unto him. He shall keep himself free from all other engagements for four whole days from that date.”

Crowley also developed a further adaptation of the old Adeptus formula: the Meditation “AAA”, Νϵκρος (Corpse), in Liber HHH, to be studied and performed as a task of the Grade.

A typescript of Ritual CXX can be found at Warburg’s Yorke Collection, Film 1, NS94: The Rituals of A∴A∴ 2. 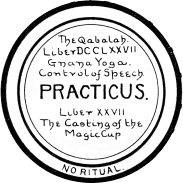 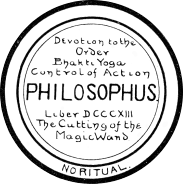 But what about the intermediary rituals from the old 1=10 to the 4=7 and the Portal? According to his Confessions, Chapter 20, Crowley only valued the old 0=0 and 5=6 ceremonies:

“The rituals have been printed in The Equinox, vol. I, Nos. II and III. There is no question that those of neophyte and adept are the genuine rituals of initiation, for they contain the true formulae. The proof is that they can be made to work by those who understand and know how to apply them.”

Thus, when he structured the Grades of A∴A∴ with Jones, they omitted the ceremonies for the intermediary Grades:

“No ritual admits to the grade of Practicus, which is conferred by authority when the task of the Zelator is accomplished. […]

No ritual admits to the grade of Philosophus, which is conferred by authority when the Task of the Practicus is accomplished. […]

Finally, the Title of Dominus Liminis is conferred upon him.” — Liber XIII

It’s also important to note that most of the work of the entire outer college of the Hermetic Order of the Golden Dawn and part of the beginning of the Roseæ Rubeæ et Aureæ Crucis have been compressed into the A∴A∴ Neophyte 1○=10□ Grade. For example, the astral working and actual ceremonial magic wouldn’t happen until one became an Adept of the second order.

The Invocation of the Holy Guardian Angel 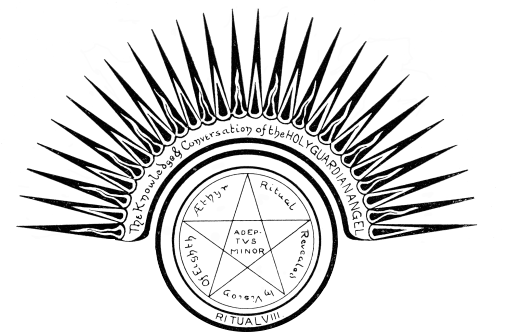 “At last, Ritual VIII admits him to the grade of Adeptus Minor.” — Liber XIII

“And thus shall he do who will attain to the mystery of the knowledge and conversation of his Holy Guardian Angel: […]

And more than this it is not necessary to say, for his Angel shall have entreated him kindly, and showed him in what manner he may be most perfectly involved. And unto him that hath this Master there is nothing else that he needeth, so long as he continues in the knowledge and conversation of the Angel, so that he shall come at last into the City of the Pyramids.”